In 2015, and at the tender age of 23, life decided to throw Kimberley a curveball and she was diagnosed with Stage 3 Colorectal Cancer. She only found out about cancer when she turned up at the emergency department unable to even stomach water.

Kimberley was aware of the symptoms of colorectal cancer and had raised the possibility with the doctors she saw, but was told repeatedly that she was too young to have it.

The first doctor’s diagnosis of her incessant vomiting was gastric flu, while the second thought it was irritable bowel syndrome. Both dismissed her suspicions of cancer.

A hemicolectomy was scheduled, followed by 12 cycles of a chemotherapy protocol known as FOLFOX. But that wasn’t the end 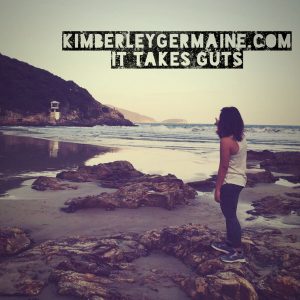 of the story. In 2017, just eight months after her last chemo session, a routine CT scan found that her ovaries were swelling.

Turned out that cancer was back with a vengeance and had spread to her ovaries, something know as Krukenberg tumour. Kimberley was pulled back into the operating theatre for a surgery known as transabdominal hysterectomy with bilateral salpingo oophorectomy.

Cancer is something that we know so much and yet so little about. We would know someone that battled cancer but wouldn’t know the intimate details because we are often too embarrassed to ask. What we then know is often mixed with half-truths and superstition, hearsay and grandmother tales.

The thing about living with cancer is that it often becomes easy to forget that you are more than your illness and that there’s still so much that you can do. To quote another blogger, we only hear about cancer when someone beats the disease or dies from it.

When Kimberley first shared her story she hoped that her random (and sometimes incoherent) rant would help educate patients that they are never too young to have cancer. She also hopes that this blog will reduce the stigma associated with cancer, and hopefully, help others be less fearful of the C-monster. Kimberley promises to update this blog as often as possible.

In the meantime, live boldly: